The contents, information, videos on this website deal with RFID/NFC technology in connection with cards, passports, ID cards, keys, telephones.

The RFID/NFC applications as well as the RFID/NFC risks and corresponding protection possibilities against unnoticed, contactless data theft by radio (RFID/NFC) are shown.

What is RFID / NFC

Similar to NFC, this is an international transmission standard for contactless data exchange via radio. The NFC technology was developed on the basis of RFID, so there are many similarities, but also some important differences.

work?
In order to transmit data via RFID, so-called RFID transponders (also called chips, tags) are required. A distinction is made between active and passive transponders.

The transponders are read out (and written to) by means of RFID readers or writers. The antenna of these devices sends the energy as electromagnetic waves to the transponder. The passive transponder uses the received energy to supply its chip with energy and to transmit the data. The active transponder, on the other hand, transmits either permanently or on request by the reader.

The design of individual transponders also differs greatly. Thus, not all models communicate via the same radio frequency or with the same transmission protocol, so that the range of data transmission differs depending on the type.

What are the differences between RFID and NFC?

NFC is a specification of RFID technology and differs in some points:

An NFC connection communicates over shorter distances than RFID (with RFID up to 100 meters and more).

NFC also allows bidirectional connections between two devices and not only between a transponder and a read/write device. For example, two NFC-enabled smartphones can exchange data via an NFC connection.

Finally, NFC transmitters always communicate via the same radio frequency. This means that the different NFC chips do not differ so much in terms of their characteristics and range.

Radio links (RFID/NFC) can be established legally, but also illegally. RFID/NFC radio hackers can steal and/or manipulate the data stored on the RFID/NFC chips unnoticed, contactless, from greater distances, by radio.

Some frequencies are very easy to shield. Others are very difficult, such as the low frequency range (e.g. 125kHz, 135 kHz), which is used in ID, payment, access (commercial, private), automotive (keyless systems).

RFID/NFC refers to the transmission of data by radio using a corresponding radio reader.

The data stored on an RFID/NFC/radio chip can be spied out legally, but also illegally, by means of radio and greater distances. This opens up undreamt-of possibilities for data thieves.
Radio chips (RFID/NFC) are used in many hundreds of millions (Germany approx. 200 million) of contactless cards, passports, ID cards, keys and telephones. Frequently, the owners do not know that these are equipped with RFID/NFC chips and can thus be attacked by radio hackers.

Radio chips (RFID/NFC) are in:

ALL passports (worldwide) with this symbol

WARNING!
Not all cards, passports, ID cards, keys and telephones with RFID/NFC/radio chips have identification.

There is a danger of radio hackers:

Rating of “Certificates”, “Seals” and “Testats” regarding RFID/NFC protection

As to our knowledge there are no legal standards regarding so-called RFID/NFC protection products, there can probably be no official certificates. The English “Certificate” is often used. “Certificate” can also only mean a certificate.

To the best of our knowledge, the relevant certificates merely confirm that there is a certain degree of shielding attenuation. However, this does not necessarily mean that maximum protection against RFID/NFC radio hackers is guaranteed.

In order to obtain this information from an appropriate test certificate, the test procedure, the devices used and the achieved shielding attenuation values (in decibels) must be related.

There will probably always be a correspondingly lax test procedure, where even a product with inadequate RFID/NFC protection quality will be certified as having adequate protection capability.

The most complex laboratory physical test series are carried out in the “RFID/NFC laboratory” of Kryptronic Technologies according to the latest test methods, findings and guidelines for RFID/NFC protection.

* by Kryptronic Technologies, Munich (developer and manufacturer of CRYPTALLOY®)

Original image of an oscilloscope: 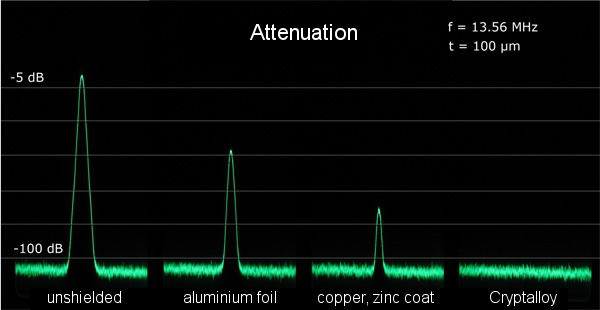 This video from Galileo/Pro7 shows the RFID/NFC technology and risks, the data theft by radio (RFID/NFC), each a statement from Mastercard & Kryptronic Technologies , the protection possibilities against RFID/NFC hackers, the RFID/NFC shielding effects of aluminium and Cryptalloy (german version).

This video from WDR shows the car keyless technology and risks, the car theft by radio (RFID/NFC) (germany version).

With the key cases, card cases, purses, simple metal sheet boxes, RFID/NFC blocker cards etc. tested by us so far, only products with and made of Cryptalloy® provided maximum, effective RFID/NFC protection in the attempt to shield the important low frequencies (in particular 125kHz) .

With the other products tested, the user assumes maximum safety from radio hackers, that the opposite is the case. So the identical problem, as known from cards, passports, ID cards.

The following video is a report from ZDF (TerraX) (german version), which also explains the theft of a car by radio:

Also, in addition to the KeySafe “Silverstone” (with integrated Cryptalloy materials), various supposed protective cases will be shown which are intended to ward off radio attacks.

We think the videos speak for themselves:

Even if a corresponding RFID key protection case blocks the radio contact directly at the car, this does not necessarily mean that the case also repels strong radio hacker attacks.

There will always be a correspondingly weak reader/test procedure where even the weakest shielding products/materials provide shielding.

RFID/NFC technology now affects almost every legally competent person in Germany, since cards, passports, ID cards, keys and telephones are equipped with RFID/NFC chips. Since we repeatedly find out that hardly any person or company has really been informed about the benefits and risks of this everyday technology, which has in the meantime penetrated society, this information page was created from an objective point of view. This page is intended for private individuals, but also for companies who come into contact with RFID/NFC technology and/or corresponding RFID/NFC protection products.

The competence team will be happy to answer your questions.